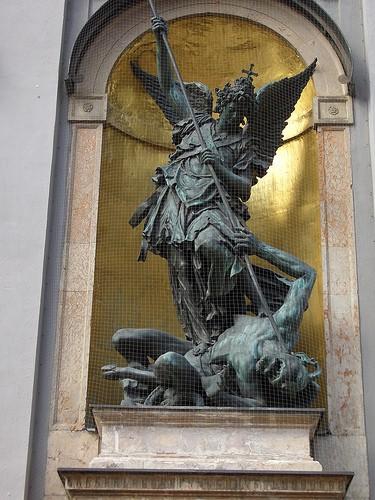 The Jesuit church of St Michael, which is located right in the city center on one of Munich´s busiest shopping miles, is known to be the largest Renaissance church north of the Alps. The style of the building had an enormous influence on Southern German early baroque architecture.

Originally built by William V, Duke of Bavaria between 1583 and 1597, the church was used as a spiritual center for the Counter Reformation.

Besides bronze statues of Duke William of Bavaria himself and other Bavarian rulers, you can admire Hubert Gerhard's huge bronze statue between the two entrances showing the Archangel Michael fighting for the faith and killing the evil in the shape of a humanoid demon.

The church crypt is a burial place for members of the Wittelsbach dynasty such as, Duke William, of course, Maximilian I, Elector of Bavaria ans well as famouse King II, of Bavaria and King Otto of Bavaria.