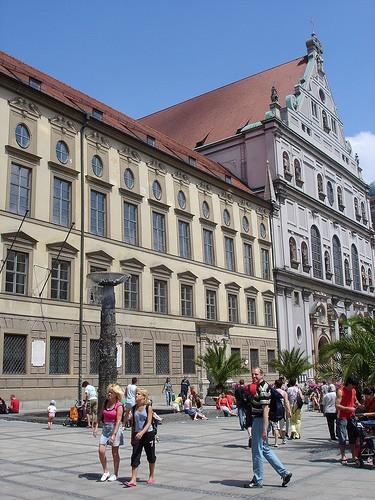 The fist part of this centrally located shopping mile, Kaufinger street starts at Marienplatz and becomes Neuhauser street halfway towards the medieval Karlstor city gate. This part of the city has been a pedestrian zone since 1970 and still is Munich`s busiest shopping place.

Not only the numerous clothing, shoe and jewelery shops make Kaufinger and Neuhauser street interessting. When strolling from Marienplatz to Karlsplatz you can also find interessting sights. Apart from Munich´s Frauenkirche , there is also

St. Michael´s church, which cannot be missed due to its impressing facade containing standing statues of Duke Wilhelm and earlier rulers of the Bavarian Wittelsbach dynasty, cast in bronze, in the form of a family tree.

Also located on Neuhauser street there is the Museum of Hunting and Fishing, that can easily be found because of the statue of a wild pig that is placed just in front of the museum´s entrance.