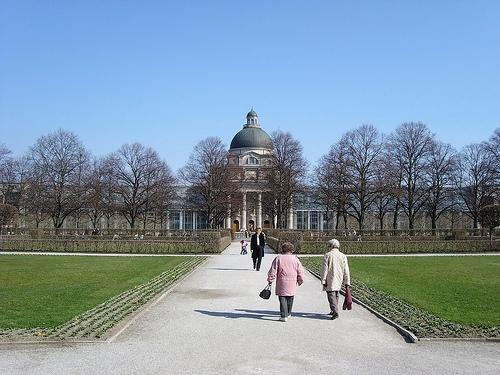 The Hofgarten (Court Garden) is known to be a nice and peaceful place in the middle of the city. This small oasis lies on the north side of the Residenz palace.

The garden itself was laid out in its present form in the early 17th century under Duke Maximilian I, and has not changed a lot since then. Pretty chestnut trees, limes and maples offer a welcome shade among the beautifully tended roses and nice flowerbeds.

The center of the Hofgarten is marked by the temple of Diana, a pavillon, that was designed in 1617 by Heinrich Schön the Elder.

On top of the pavilion you can find a statue made of bronze entitled “Tellus Bavarica”. The statue symbolizes the treasures of the Bavarian land – grain, game, water, and salt and was designed by Hubert Gerhard in 1594 as a statue of Diana, goddess of the hunt. In 1923 the statue was remodeled by Hans Krumpper into the allegorical figure of Bavaria.

Also an eyecatching monument is the gate that borders the western end of the Hofgarten. The imposing gate whichs also gives entrance to the garden was designed by Leo von Klenze.