What are you looking for?

Tell us what you're looking for...
Want to Run Your Own
My Guide Website?
Find Out More

Oktoberfest is officially the most fun you can have with silly clothes on!

I am very surprised to be writing this post on the plane home from our rather hectic, somewhat surreal trip to Oktoberfest over the weekend. I am surprised to be writing this as I had envisioned I wouldn’t have my eyes open at this point in time let alone have the physical capability to press the keys on my key board given where we had just been and my propensity to enjoy a drink or ten.

However, what is driving me on and I am sure much of this will need to be heartily corrected by a more sober eye in the morning is the fact that I haven’t had that much fun anywhere in a very long time and I want to get it down before I wake up like a zombie tomorrow. 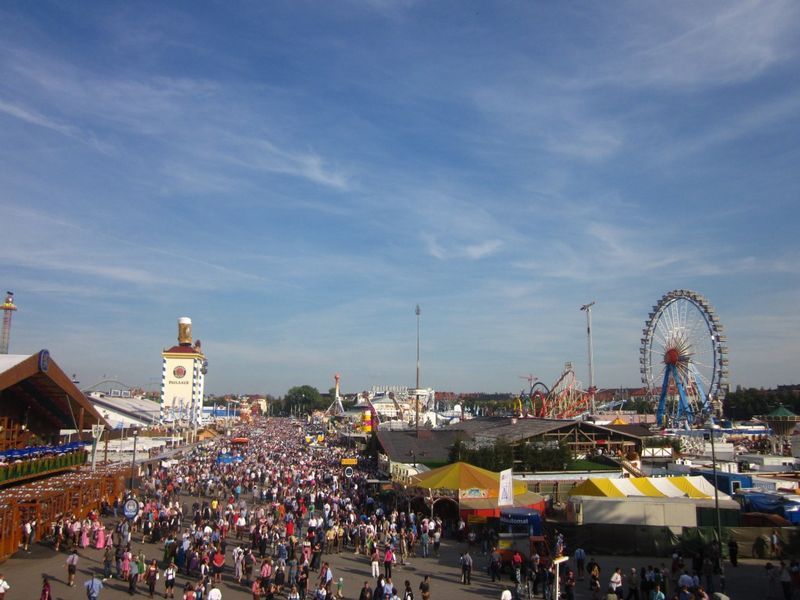 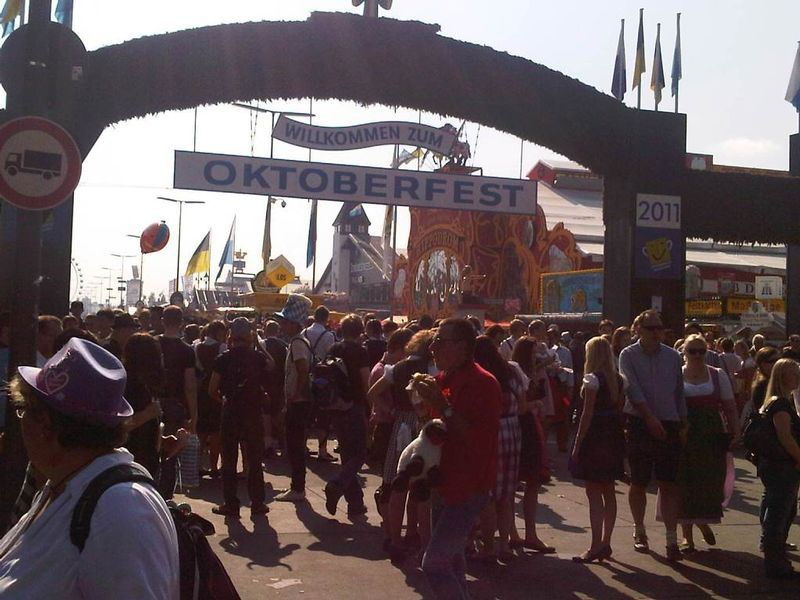 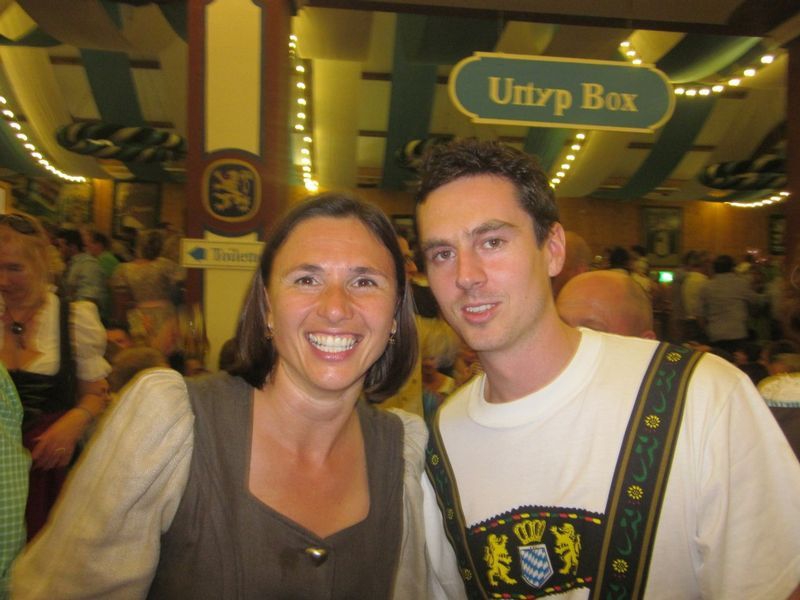 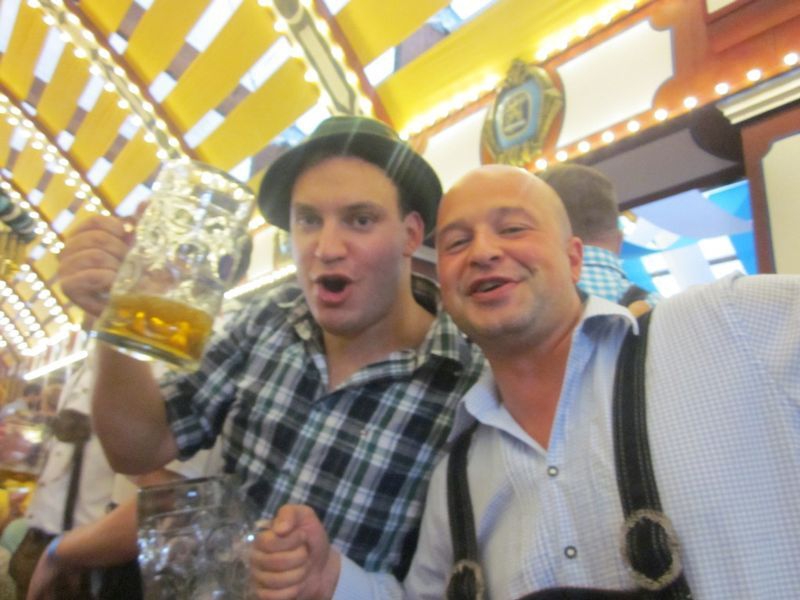 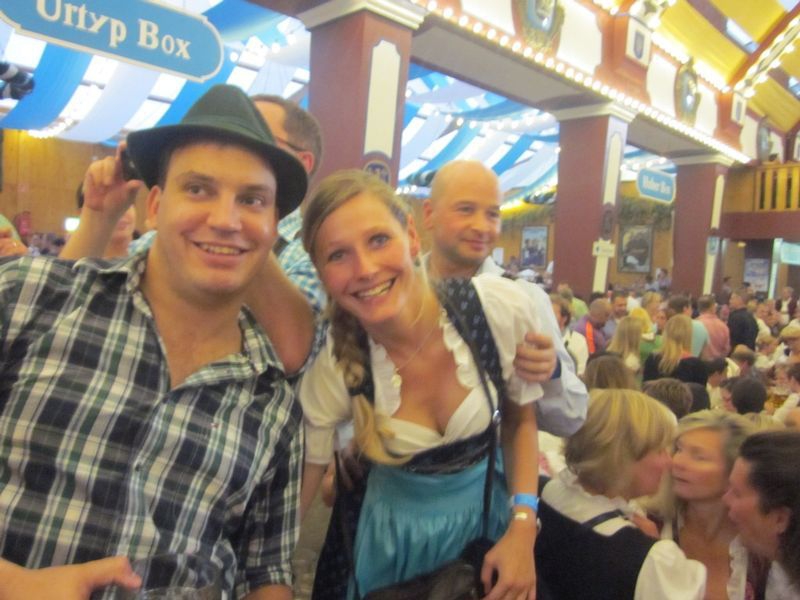 Let’s firstly cover some basic facts about Oktoberfest whilst they are still there, the most confusing of which is that it’s largely not in October, it lasts for two and half weeks at the end of September up until the first weekend of October (apparently it has moved forward over the years to catch the last of the summer sun). It is held in Munich and was originally a festival which featured horse racing in front of the Royal Family. It is now the biggest fair in the world and attracts over 5 million people a year. Only brewers who are based in Munich get to feature their beer and they brew a special brew (stronger than usual!) especially for the festival.

For myself and Neil, my travelling partner, this was a semi-business trip and so I did not have the care-free mind set you might have heading off to the festival with your best friends. However this turned out to be a good thing, this was our first time but we were going with professionals, hardened Oktoberfest goers, who lived in Munich and knew exactly what the score was.

We were going on the last Sunday of the festival and had reserved seats in one of the biggest tents, which are apparently nigh impossible to obtain but fear not there are 12 tents in total which are hosted by the brewers and most people queue to get in. When I say tent though, this is not a wedding marquee but a giant structure supported by wooden beams, ours even had a mezzanine level with another hundred or so people on there and giant chandeliers hung from the ceiling. 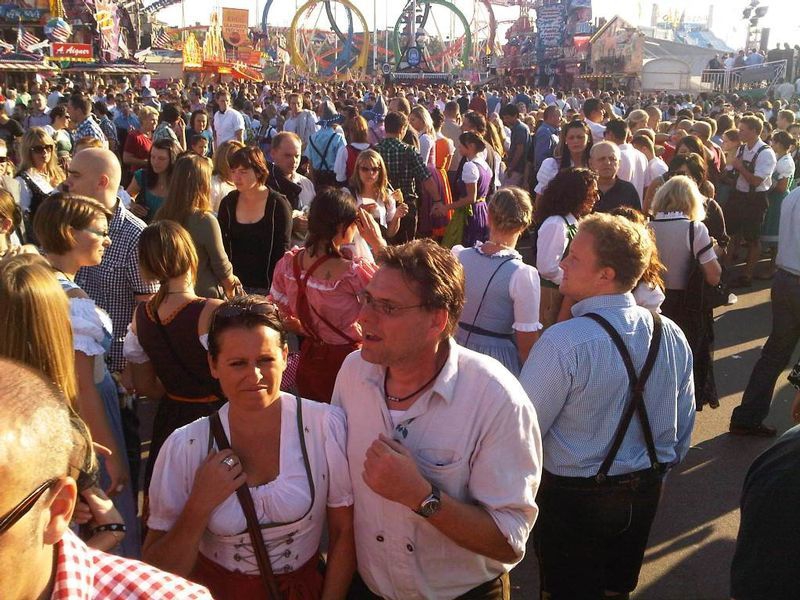 We had to be there for 4pm and so spent the day trying to find some Lederhosen. You would have thought this would be an easy task given the fact that we were in Munich at Oktoberfest but no, on Sunday in Munich everywhere is shut. Our solution to this was that I ended up buying a large t-shirt with Lederhosen printed onto it and Neil bought a green hat. Not a great effort but it turned out we needn’t have worried, yes most of the locals were in Lederhosen but they get given these as a rite of passage and unless you are intending on going every year you can end up forking out a lot of money for something you will wear once. Although we did think it would make a fantastic fancy dress/pub crawl outfit back in London.

The actual festival grounds are free to go into and it really is best described as a fair, similar to the ones you get in the UK with fair rides, candy floss, silly hats but this is just on a whole new level. The atmosphere immediately brings a smile to your face, this really is just a celebration and you will have never seen so many people having so much fun. Because of the size of our party it was not wise that we were let loose on the grounds and so we wound our way to the tent to start the festivities. 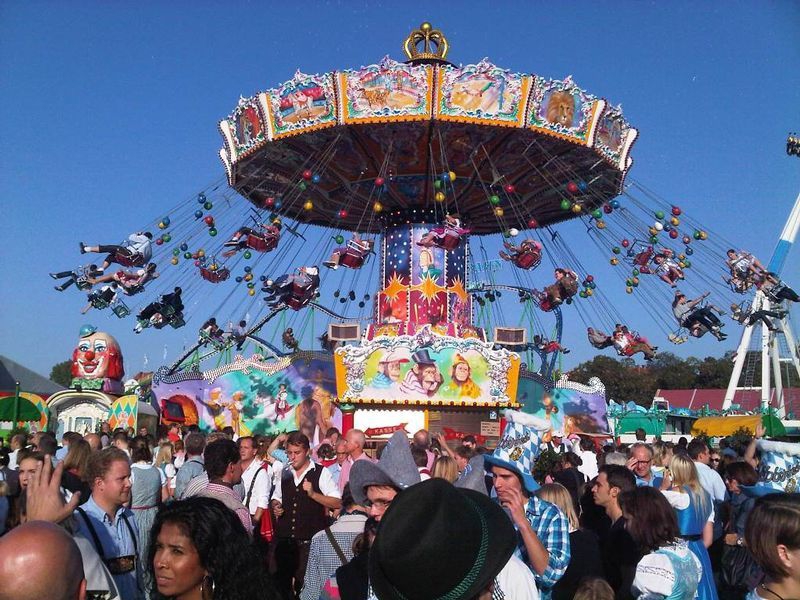 Once you first arrive in the tent it seems like everyone else is several levels and decibels above you but with one of the giant beers in hand and some giant pretzel in your stomach it is not long before you have joined their ranks. Thinking back the recipe is quite simple, you dress in lederhosen albeit a fake version, you get a put on long table with massive glasses filled with beer, you put a band in the middle that sing not just traditional German songs but all sorts (one that sticks out was Bon Jovi living on a prayer), you clash mugs, you high five, clash mugs, drink, shout and sing. Until finally you are winding through the crowds at night into a taxi and it’s over…

The next day you wonder what the hell happened but you can’t help remembering the amount you laughed. Oktoberfest is officially the most fun you can have with silly clothes on!