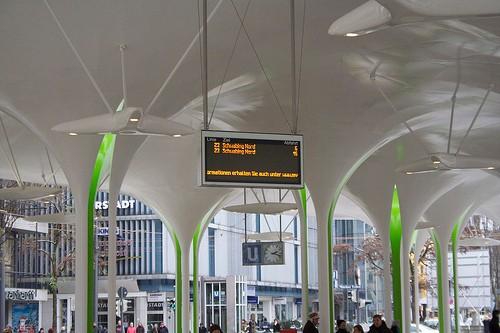 The Leopold street in Schwabing is a trendy shopping mile, where you can find small and low budget shops as well as some fancy boutiques, gift shops, department stores, shoe shops and numerous food places.

Besides the various shops the Leopold street is also the perfect place to enjoy a coffee or a drink at one of the street cafes. Here you can be a part of the Munich lifestyle by watching people going by. International chains such as Starbucks or San Francisco Coffee company, as well as old and traditional brewhouses invite for a drink.

A number of nighlife loactions are also located on and around Leopold street. Therefore you can choose between several bars, nightclubs and cinemas and enjoy Schwabing´s motto 'see and be seen' no matter if you come for shopping during the day or if you decide to party at night.

The street itself was name after Prince Leopold of Bavaria in 1891. The southern end of Leopold street is marked by the Siegestor. When walking up north in direction of the Muenchner Freiheit, you will pass by the famous Munich academy of arts, that was founded by Maximilian III Joseph in 1770.

Close to U-Bahn station Gieselastrasse, which lies in between University and Muenchner Freitheit, there is the large sculture of the 'Walking Man', designed by Johann Borofsky. The statue, which is 17 meters high and weighing about 16 tonnes is placed just at the entrance of the 'Muenchner Rueck' reinsurance company and was also funded by the same.